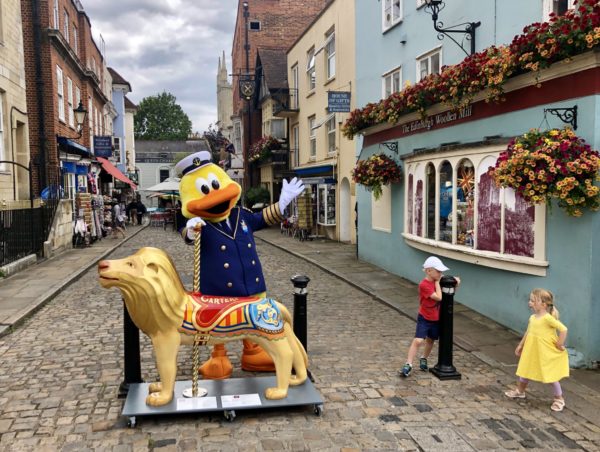 Duck meets lion! This beautifully decorated lion sculpture was created by the talented team at Carters Steam Fair to resemble a carousel horse and is displayed opposite Windsor Castle’s King Henry VIII entrance.  A random duck (from Windsor Duck Tours) just happened to be passing..  Quackers!

25 lions and cubs have taken up pride of place across Windsor, with more to follow on Thursday and Friday.  All of the lions will be installed in their new territories by Saturday 10th August, although ‘Victoria’ has  been a bit delayed and will be installed next week.

As soon as the lions’ feet touched the ground, they were swamped by lion fans of all ages,  admiring the artwork and taking selfies.

Please note NO CLIMBING ON LIONS!  We need the artwork to remain in good condition for the charity auction in November, so please spread the word that touching the lions and take selfies is fine, but please NO CLIMBING!

Head over to the Lions page of the website for a map showing which lions and cubs have been installed so far. 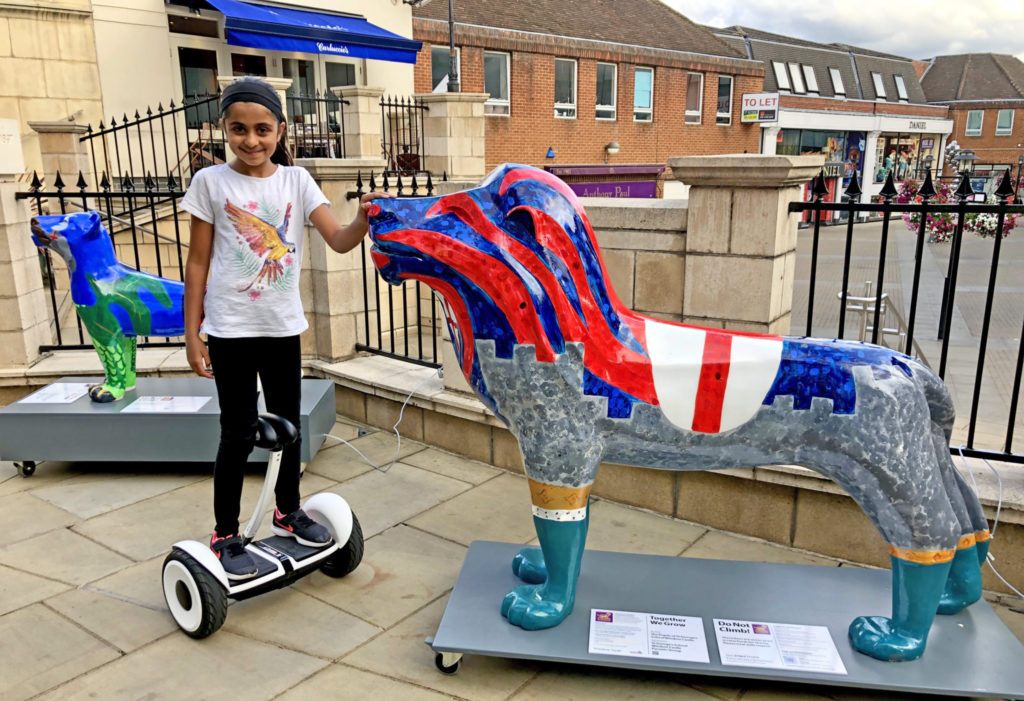 Nine year old Reya from St George’s School with their ‘Together We Grow’ lion and cub sculptures displayed by Carluccio’s in Windsor Royal Shopping.  Reya helped to decorate the lions, as did every St George’s Windsor Castle pupil – a roarsome all-school project! 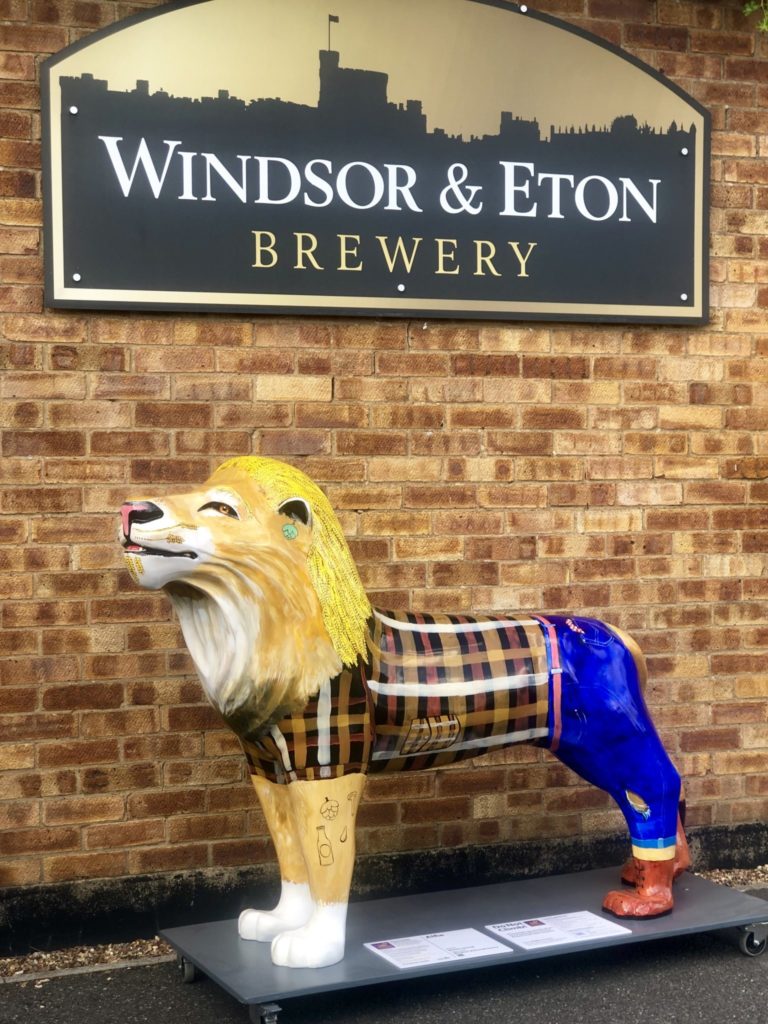 ‘Alfie’, the beer-loving hipster, will be displayed from Saturday 10th August.  The brewery is open for tours and you can pop into the brewery bar until late in the evening. 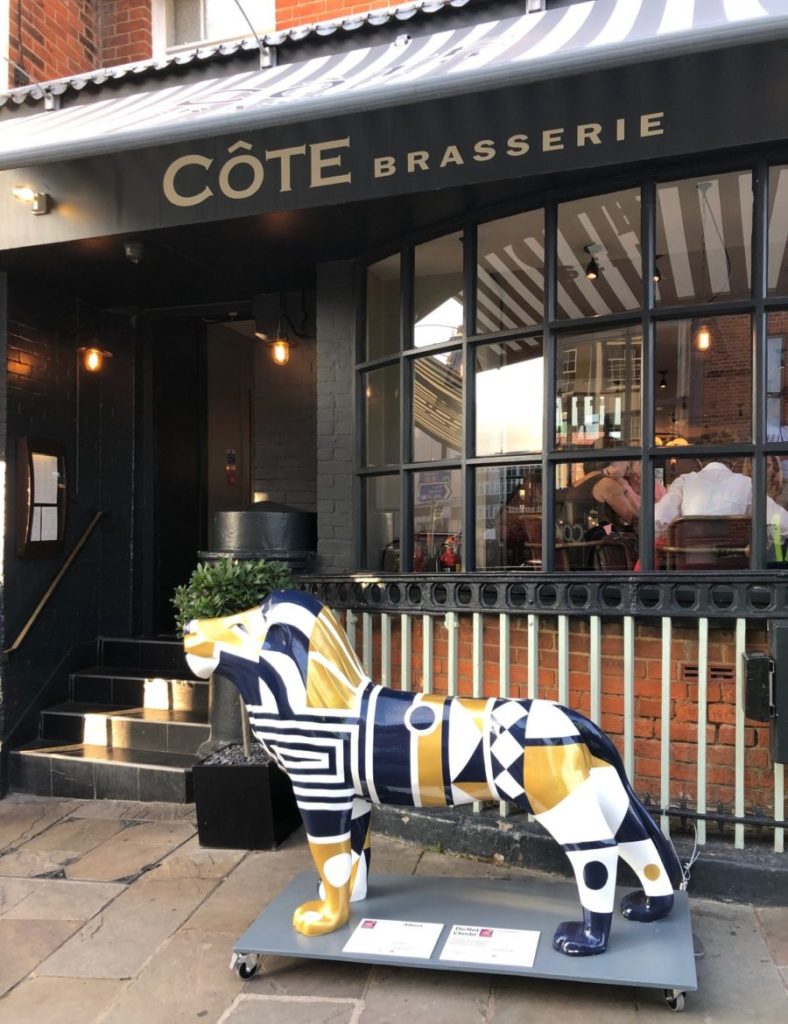 ‘Albert’ crossed over Windsor Bridge to his new home at Cote Brasserie in Eton, a great place for hungry and thirsty lion fans to have a meal or drink on their beautiful riverside terrace. 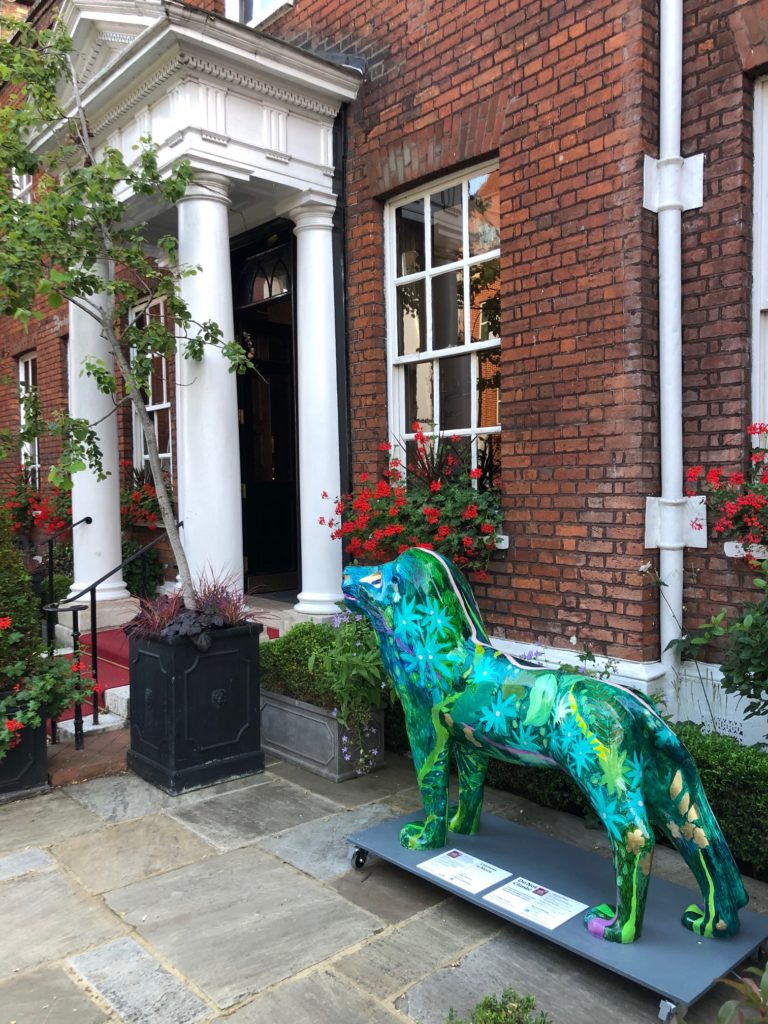 ‘Lioness is More’, painted by Lelia Pissarro and sponsored by Winsor & Newton, has taken up residence at the Sir Christopher Wren Hotel.  Lelia’s daughter Lyora’s lion, ‘Alan Howland’, has pride of place on the other side of the entrance. It’s thought to be excellent feng shui to pass through the gaze of two lions… 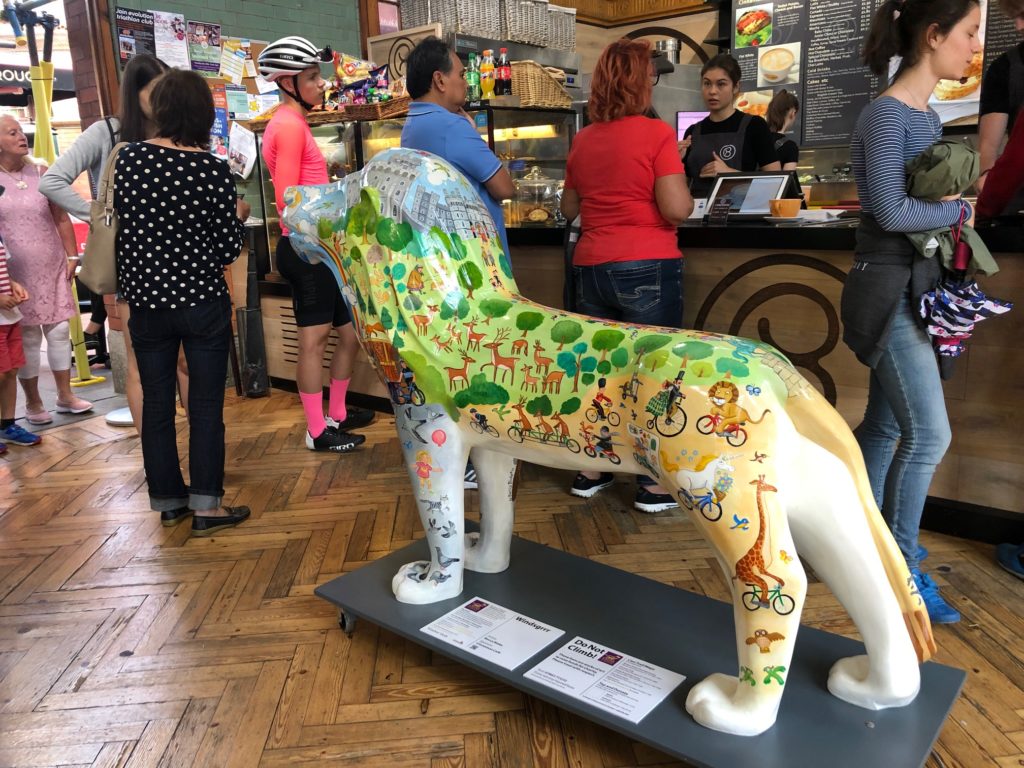 ‘Windsgrrr’ in the queue for buns and juice at the Cinnamon Cafe in Windsor Royal Station, where he will never be too far from the cake counter!  Another grrrreat place to stop off for their famous cinnamon buns, coffee and drinks while on the Lion trail.  They also stock the Lion trail maps. 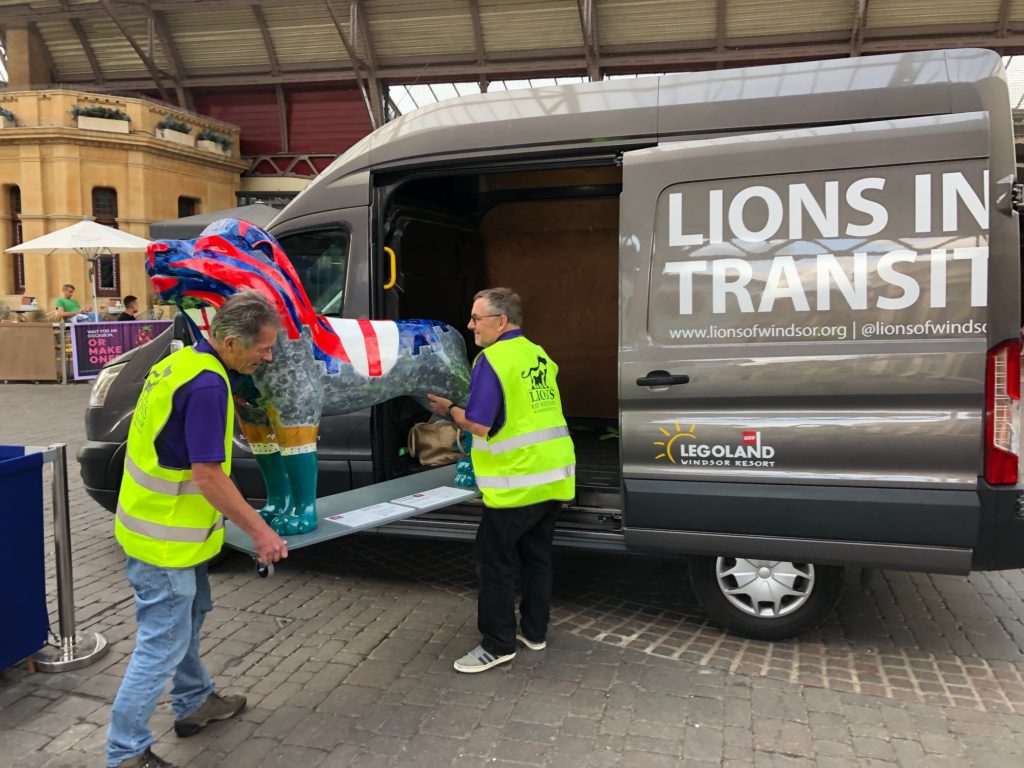 A huge thanks to Allen Ford and SNC Slough Transit Centre for the very kind loan of our Lions In Transit van!  Great work by Barry and David on the installation team.  25 lions installed on the first day. 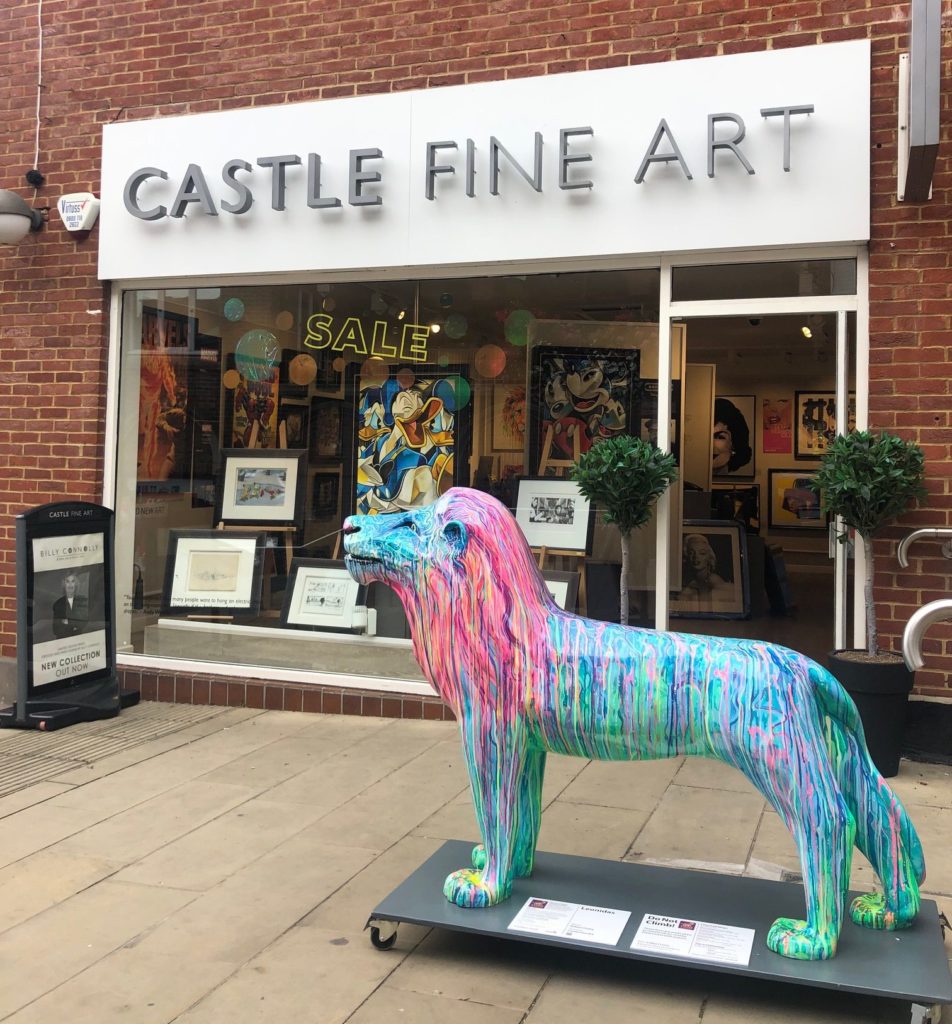 Leonidas, painted by Robert Oxley, arriving at Castle Fine Art in Windsor Yards.  Works of art indoors and out! 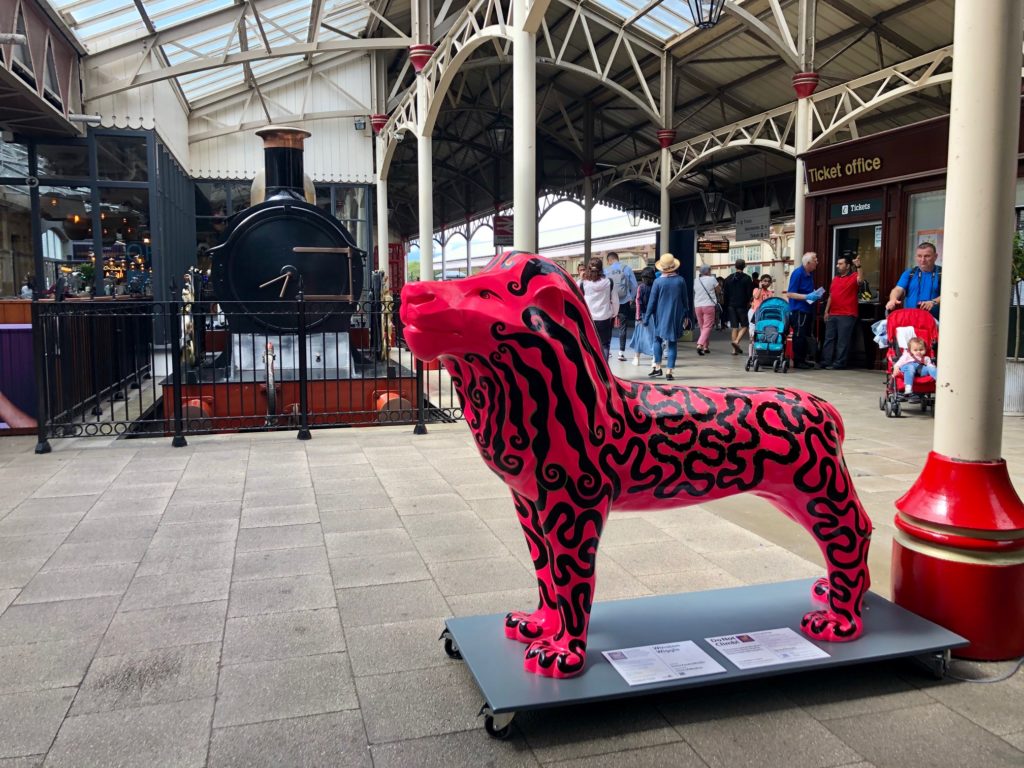 The eye-catching ‘Winston Wiggles’ by Zandra Rhodes is stationed in Windsor Royal Shopping by Windsor & Eton Central Railway Station.  Like most of his pride mates, Winston Wiggles will be on display during the day and will then head indoors for sleeping at night.. 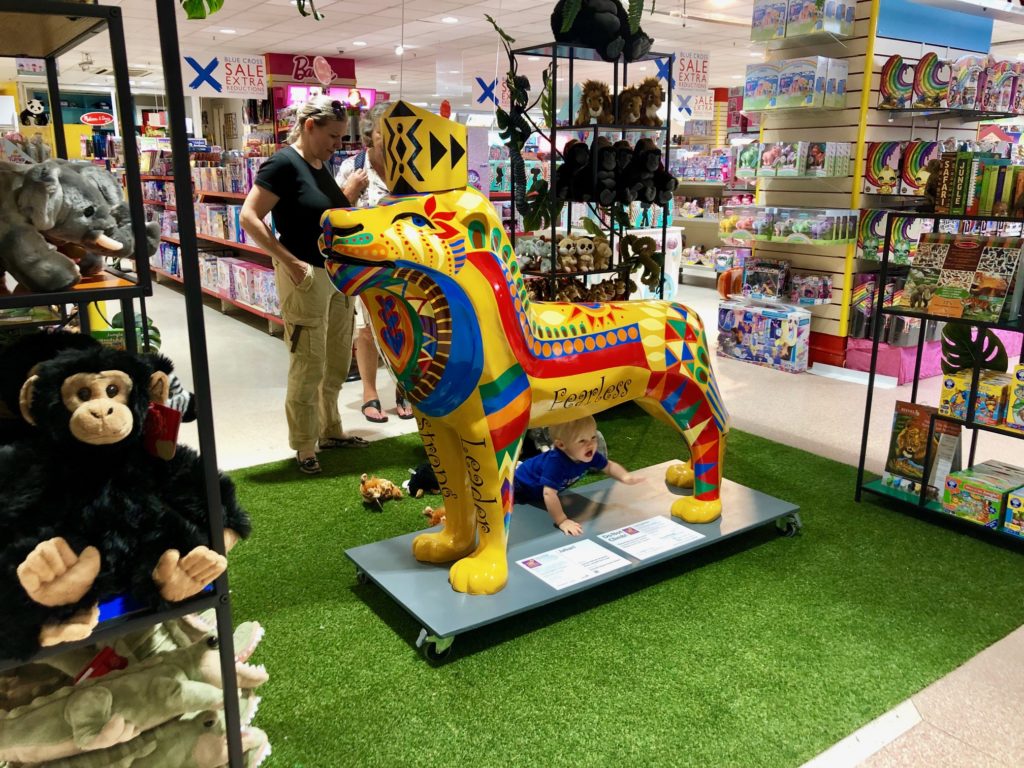 The fabulous Jabari has his own African-themed set in the Toy Kingdom at Daniel Department Store, where he is attracting attention from lion fans of all ages.. 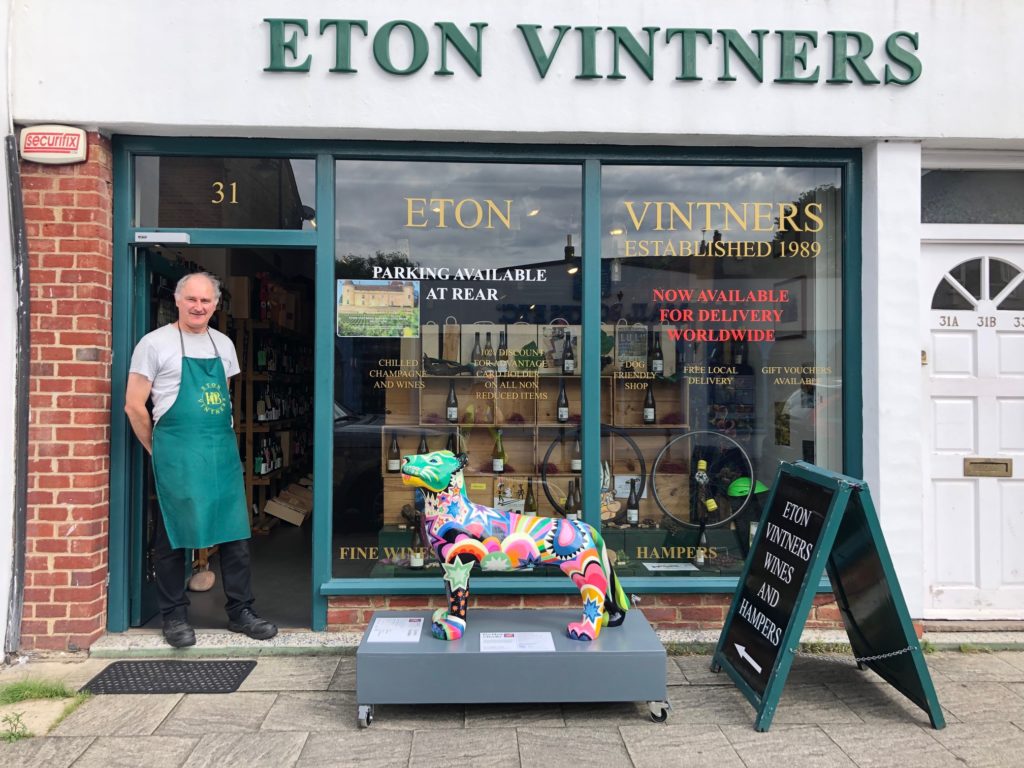 The colourful ‘Cosmic Reuben’ was painted by leading designer Sally Kelly and is displayed by Eton Vintners in St Leonard’s Road.  Good excuse to pop in and browse their fantastic range of wines! 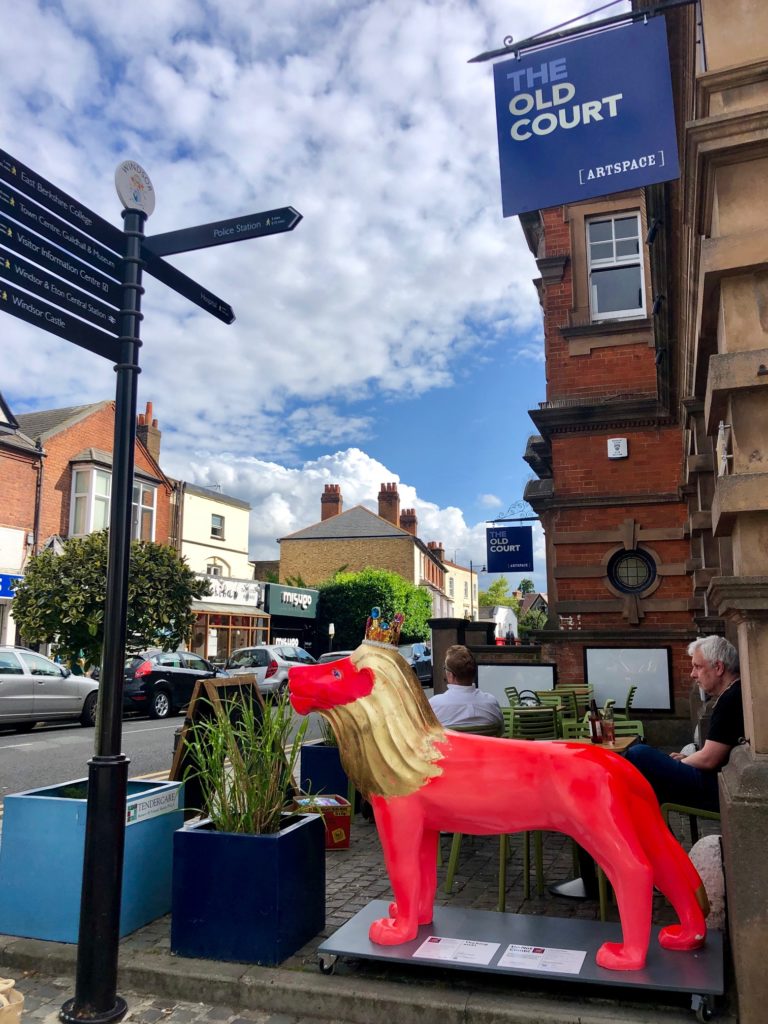 The stunning ‘The King and I’, painted by the fabulous British sculptor Andrew Logan, can be seen at the Old Court Arts Centre in St Leonard’s Road.  Head over to say hello and catch some of their grrreat plays, entertainment and exhibitions. 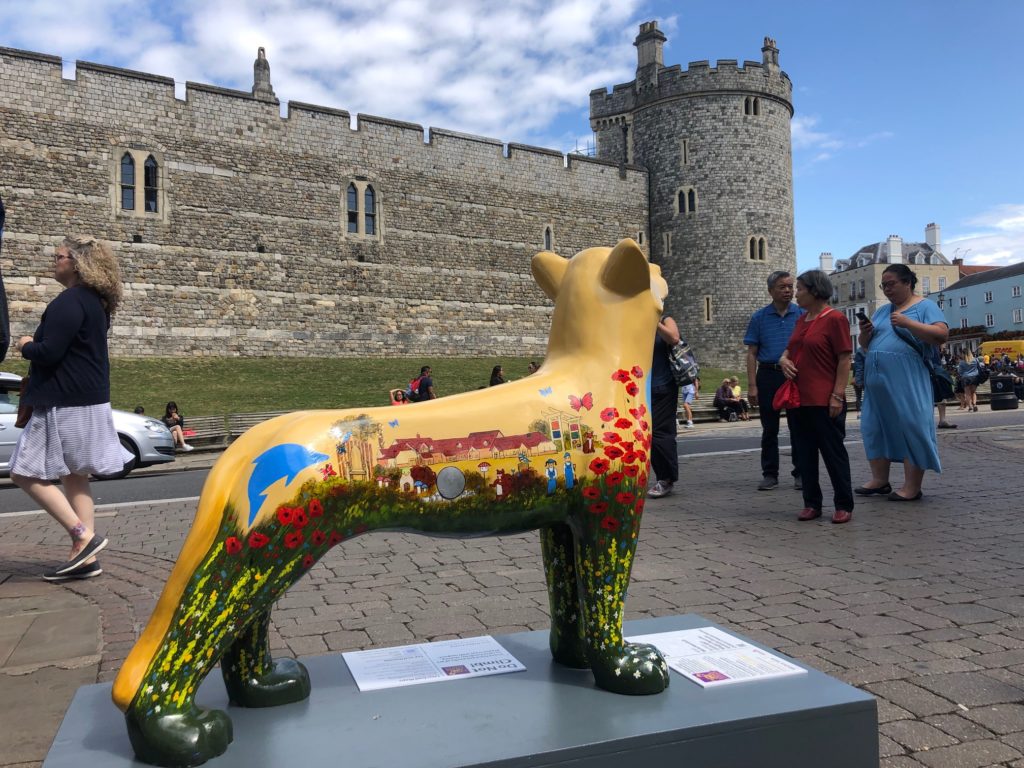 ‘Simba’, painted by Maria Meerstadt for the Alexander Devine Children’s Hospice Service and sponsored by LEGOLAND Windsor Resort, has a fantastic view of Windsor Castle!